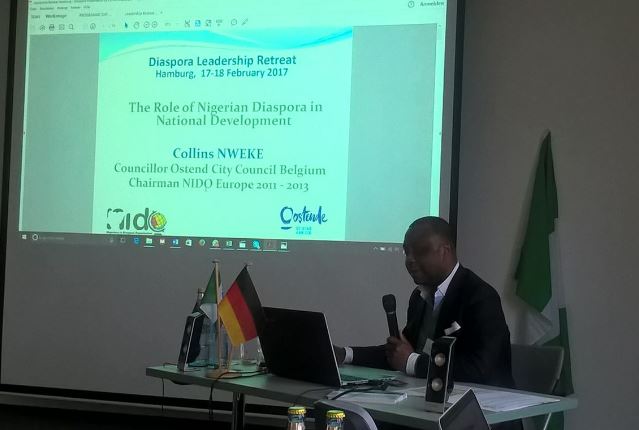 presentation_leadership_retreat_hamburg_2017.jpg#https://assets.nationbuilder.com/groenwestvlaanderen/pages/1525/attachments/original/1527765003/presentation_leadership_retreat_hamburg_2017.jpg?1527765003#image/jpeg
THE ROLE OF THE DIASPORA IN NIGERIAN NATIONAL DEVELOPMENT AND NATION BUILDING: A Historical Perspective & Review.(Being abstract* of a Keynote Presentation by Collins Nweke at the

Recent discourse on the participation of the Nigerian Diaspora in national development has played up two main phenomena: Brain Drain and Brain Gain. While brain drain refers to mass migration of Nigerians of working age out of Nigeria, brain gain touches on the return of these nationals, often with resources, both capital and human, required for national development and nation building.

To exploit the goodies of brain gain, a good understanding of brain drain is omissible. Why and during which period was the brain of Nigerians drained in such significant and noticeable numbers? What factors gave rise to the drain? What exactly has been drained and to what extent has the drain constituted a cog in the wheel of national development? Available literatures examining brain drain puts the number of Nigerians permanently based abroad at between 6 and 9 Million. The vast majority are gainfully employed and contributing meaningfully to the socio-economic development of their host countries. Tens of thousands of the active professional Nigerians based outside Nigeria are world-class inventors, medical professionals, and experts in science, technology, the economy, politics and other fields. These include first generation Nigerian migrants whose initial orientation was Nigeria prior to their sojourns abroad as well as their offspring born abroad and currently hitting up to the third generations.

The presentation on The role of the Diaspora in Nigerian National Development and Nation Building posits that human capital resources of Nigeria have continued to play decisive roles in other economies of the world, while national economy of Nigeria stagnated between 1960 and 1999. This constituted a strangling setback on national development and informed Government's resolve under President Olusegun Obasanjo, with the return to democracy in 1999, to have its Diaspora organized and reverse the brain drain to brain gain.

The pertinence of an organized Diaspora was reviewed against an unorganized Diaspora and an attempt made at establishing the collateral loss to the nation by the situation. The presentation further examines the role of visionary, proactive governance as opposed to leadership by exigencies in the identification of the potential impact Nigerian Diaspora will have on national rebirth. It is the assertion of the presentation that talks of Brain Gain are no happenstance but by the execution of a set of deliberately planned and strategically deployed actions by both Government and the Diaspora.

Examining existing mobilization methods and engagement tools in facilitating brain gain, it is the contention of the presentation that reversing the incidence of poverty, Nigeria's greatest nemesis; gaining back the brains of the Nigerian Diaspora is a critical success factor. While copiously acknowledging that the job of gaining back the lost human capital of Nigeria resulted from visionary leadership of Government and is currently work in progress, both sides ? Government and Diaspora ? have their distinct roles naturally caved out and must take these roles seriously if the brain gain project is to be the success that it ought to be.

Drawing from examples globally where Diaspora mobilization have resulted in socio-economic transformation, the presentation advocates a number of measures, untried in Nigeria as it were, to mine the abundant human capital reservoir of the country towards accelerated national development.