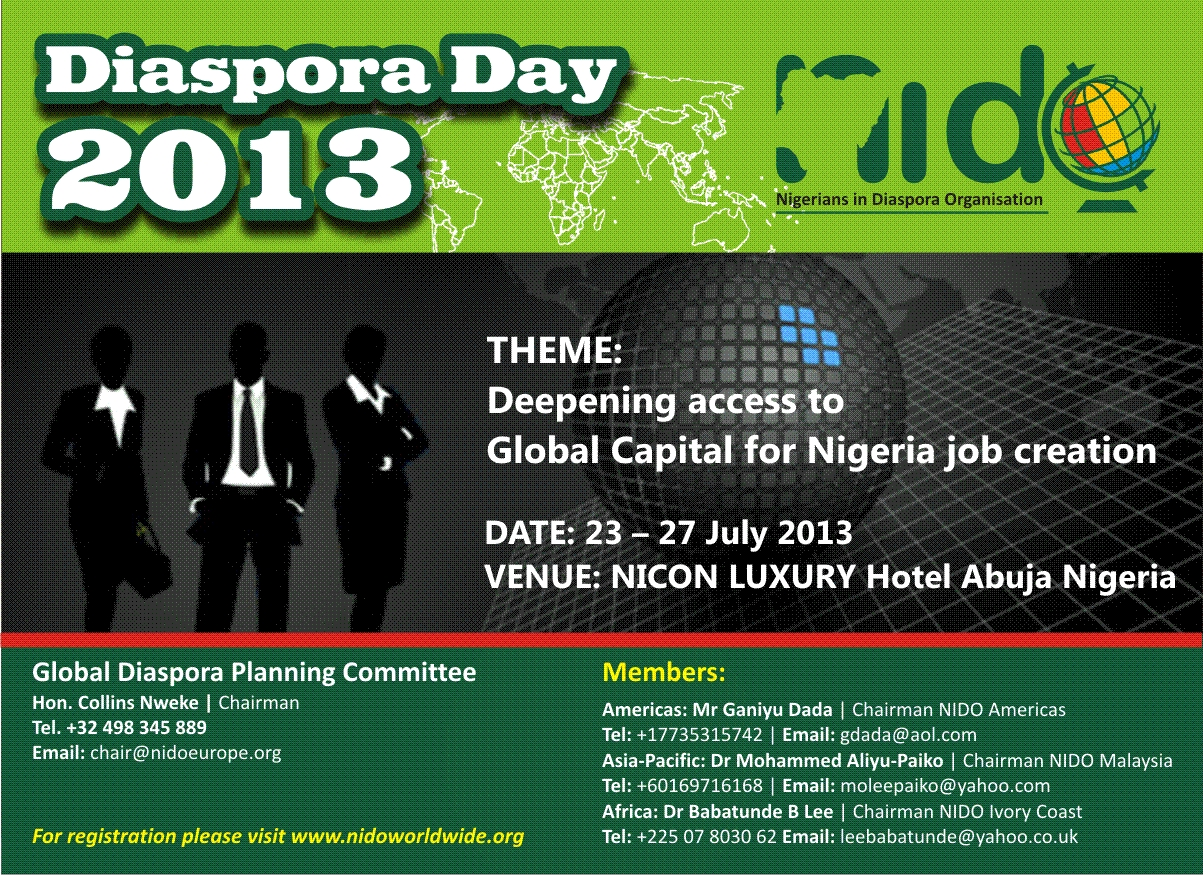 nido_diaspora_day_2013_banner.jpg#https://assets.nationbuilder.com/groenwestvlaanderen/pages/1503/attachments/original/1527763787/nido_diaspora_day_2013_banner.jpg?1527763787#image/jpeg
The saying that you can hardly conceal pregnancy with bare hands runs true with the depreciating value that the Nigerian Diaspora Day adds to national development. Despite its commendable vision and sparse achievements, the humongous shortcomings of the Diaspora Day are threatening in 2015 to explode in the face of all stakeholders. There are certainly no winners but the biggest looser is the Nigerian state. If the government of President Muhammadu Buhari had the benefit of good counsel, 2015 should have been used as an interregnum to evaluate what had gone on for the last decade, measure the benefits of the Diaspora Day against the huge expenditure. It is certainly ill-conceived to have changed the date of the event from the traditional 25 July (as is in the national calendar) to 25 August, all because at all cost, the event must hold. The question is: why must it hold at all cost? At whose benefit?     OlusegunObasanjo

Diaspora Day - Science & Technology Conference has been praised for the pull factor it represented in attracting back home, Nigerians who otherwise had literarily hung up on the country. Due to the opportunity it provided for facilitating interface between Nigerian professionals in the Diaspora with the public and private sector, the day became a fertile recruitment ground for employers in Nigeria (private & public) who saw value in the international exposure of Nigerians based abroad. Away from hearsay, it gave Nigerian Diaspora a unique opportunity to assess situations in Nigeria first-hand and determine how best to plug into the developmental process of the country. Between 2005 and 2010, it could be argued that nothing galvanised the Nigerian Diaspora better than the Diaspora Day and facilitated the reversal of brain drain to brain gain.

Despite its commendable vision and achievements, there are a number of shortcomings of the Diaspora Day. Out of a long list four of the challenges posted on the wall of Diaspora Day (DD) are more nagging. Firstly, the DD, over the years, began to lack purpose and focus. For example, for no justifiable reason the focus on Science & Technology was dropped without replacement. Style became increasingly more important than substance as fewer efforts were expended on attracting the best and the brightest in Diaspora to drive the developmental agenda of the country. Secondly, the event became incrementally inconsistent. For no genuine reasons some years are skipped or planning stopped and event cancelled. Thirdly, lack of follow-up on conference resolutions or recommendations is a hallmark of DD. There is neither evaluation nor monitoring and implementation of conference outcome is non-existent. In some cases conference reports are not issued or published. Last but not least is the issue of ownership. Nigerians in Diaspora Organisation (NIDO) the official Diaspora body feel dangerously marginalised in the planning of the event. Some have described the situation as absurd and cannot justify how the Nigeria National Volunteer Service (NNVS) under the Office of the Secretary to the Government of the Federation (OSGF) would hijack an event which is meant to be for the Diaspora. In the early years, the Diaspora co-owned the DD both in terms of content development and presentations at the event itself. In recent years, even the leadership of the global Diaspora struggle for visibility at the event. Prime speaking slots are dominated by political figures who depart the scene along with their advisors before it is the turn of the Diaspora to share the ideas that brought them home in the first place. The Diaspora are often left talking to themselves.

A combination of the challenges highlighted above and more, which had been brewing over the years, reached a climax in 2015 when calls from NIDO for an early start in the planning of DD2015 were either ignored or not adequately responded to by government represented by the NNVS. The leadership of the organisation, consisting of the continental heads in Africa, the Americas, Asia-Pacific & Europe, constituted a global planning committee and worked out what appeared to be a robust set of events spanning nearly a week to commemorate the DD2015 with 25 July, the official day in the national calendar as the focal day. In a move that vexed the NIDO leadership beyond pardon, the NNVS announced that government has postponed the DD2015 to 25 August. A meeting between NIDO and the NNVS to find a common ground ended in an impasse. According to NIDO, it went ahead to hold what it claimed to be a scaled down DD2015 on 25 July and announced that it will not only boycott the planned 25 August event by the NNVS but issued a statement warning its members to stay home. Truth be told, the leadership of NIDO has every reason to be upset but the boycott and the call to members to do same ? which by the way was later retracted ? is another kettle of fish. There have been several important voices that spoke up in condemnation of NIDO action that it is of no effect to add to those voices here. Suffice to say that intelligent leadership calls for pragmatism and ingenuity. A leader that acts in vengeance or for personal gratification is only digging his grave.

The Future of Diaspora Day

As already mentioned, the vision behind DD is laudable. Indeed it made a good start and the establishment of a focus with the addition of Science & Technology conference a year later was brilliant. The modest achievements of the DD are dotted here and there in the country but obscured by the absence of evaluation and monitoring. The challenges facing the DD and indeed the entire Nigerian Diaspora politics is huge but mitigable. It is doubtful that the huge resources invested in the DD both by government as sponsor and the Diaspora who spend hard-earned resources flying into the country, has any significant return on investment. If the DD was a business venture it would have long gone bankrupt. There is no fancy way of saying that all stakeholders need to go back to the drawing board. Two great opportunities for reform of this whole business beckon. One, this administration is new and currently taking its time to hopefully put in place good governance architecture. There cannot be a better opportunity to get the broader Diaspora Policy right. Two and perhaps more importantly is the newly passed Nigerian Diaspora Commission Bill. Government must see this Bill as an omissible tool in finally getting the Nigerian Diaspora policy landscape right. You cannot continue to wish away the existence of other self-styled 'Diaspora Organisations' even when they are domestic entities but competing for relevance with NIDO. Or how do you as government recognise the plethora of community, social welfare, and cultural organisations in Diaspora without watering down the role of NIDO as official partner of government on Diaspora matters? If government does not see the Commission as avenue to create jobs for its boys and girls, it stands a chance of correctly re-drawing the Diaspora map for the good of nation. There are enough competent hands beyond the individuals currently posturing and positioning themselves for a seat at the Diaspora Commission table. A good homework by government is an absolute necessity.

Collins Nweke served Nigeria's official Diaspora body first as Executive Secretary / Chief Executive starting from 2004 and later as General Secretary ( a Board position). He finally served as Board Chairman until November 2013